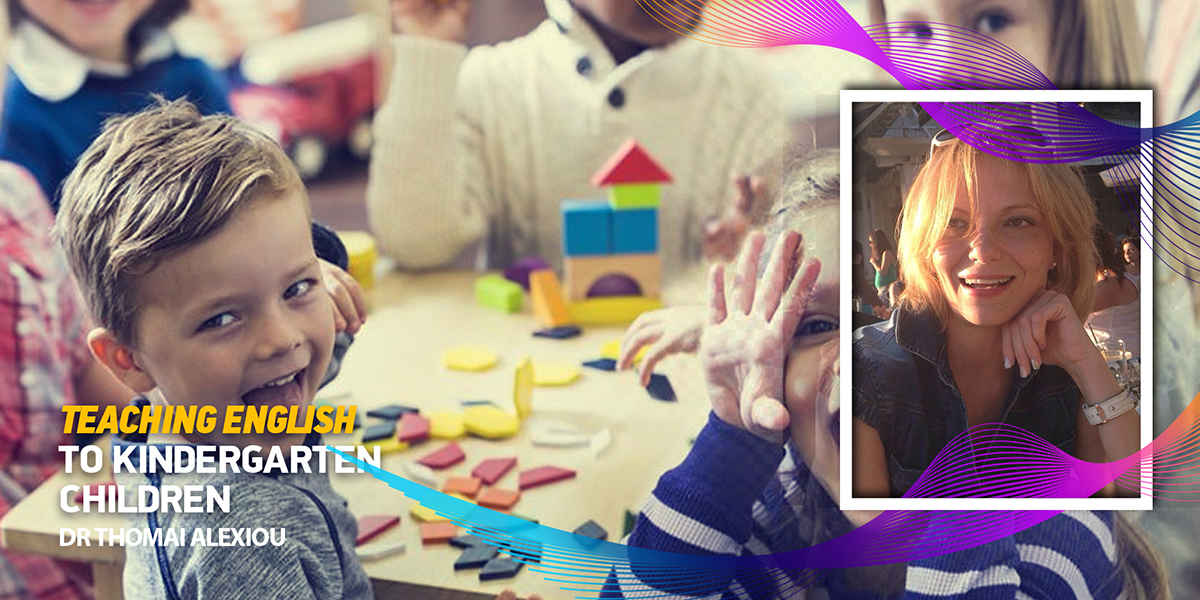 The introduction of English in pre-primary schools is rapidly increasing worldwide since there is a growing belief that foreign language learning is beneficial for the young child’s intellectual and educational growth; moreover, an additional language in the early years is thought to broaden young children’s geographic and cultural horizons.

Although English as a foreign language has been introduced to preschools across Europe and beyond, Greece appears to have lagged behind.  The current Ministry of Education recently announced the pilot introduction of English in state preschools in Greece as of September 2020.

Early foreign language programmes should capture young children’s hearts and sustain their enthusiasm for a lifetime.

We discuss this issue with Dr Thomai Alexiou, Assοciate Professor, Department of Theoretical and Applied Linguistics, School of English, Aristotle University of Thessaloniki.

That depends. This opinion relates to the earlier the better trend, which is still hotly debated. However, it has been proved that when learners receive only a few hours of instruction per week, those who start later often catch up with those who began earlier. So if we want to introduce English to preschoolers, considering that this way they will get the language proficiency earlier, we deceive ourselves.  An early start by itself, guarantees nothing; it needs to be accompanied by other things like a rich linguistic environment, huge amounts of exposure, continuity of input and a smooth transition from pre-primary to primary and from primary into secondary education.

However, it is important to clarify here that the purpose of exposing children to any additional language (not just English) at an early age should not be merely linguistic achievement but all the benefits children gain from it.

Not really. It takes many hours of exposure, a large amount of input, and much more to create the conditions for bilingualism. It is not a realistic goal yet as our educational system is different and we live in Greece which is not a bilingual country. As I mentioned, the main consideration of being exposed to an additional language at these very young ages is the multifaceted advantages they get and these advantages do not relate just to language and future success but to other pedagogical and cognitive benefits. As the saying goes, ‘not everything that counts can be counted and not everything that can be counted, counts’.

This is a view that causes worries to many parents. The idea behind it is that children may confuse L1 with L2. However, research shows that from a very early age children can be exposed to a large number of languages at the same time without any problems. We have no evidence that it is a dangerous or harmful action in any way.

Nevertheless, this confusion with L1 cannot really happen in an EFL context since the aim is exposing the child to the language and offering linguistic stimuli and not formally teaching the language. Children are just exposed to the additional language for a very limited amount of time; listening and speaking are the skills that are emphasized while there is no reading or writing at this stage. Therefore, any confusion with L1 is not expected. On the contrary, the additional language can actually serve as a ‘bridge’ or a common starting point for children who share the same class but not the same language.

Yes, absolutely. Learning a language goes beyond a language skill; it is a creative process that actually affects the holistic development of the child. There are, of course, language benefits such as enrichment of vocabulary and phrases, pronunciation, language awareness and faster acquisition of oral comprehension skills.  But there are also cognitive benefits such as greater mental flexibility and also cultivating cognitive skills such as memory, problem solving, inductive skills etc.

Moreover, research studies in European countries show emotional gains such as increase in motivation and self-confidence and cultivation of positive attitude towards not only the language but also towards different cultures. These have important social consequences as well such as respect for cultural diversity, broadening children’s cultural horizons, developing open-mindedness and many more.

To an extent, yes, as they have been trained to use such techniques at the University but also through the very successful PEAP programme. Yet, the focus here is preschoolers and this is a distinctly different age group. Most English language teachers are not familiar with the preschool environment and philosophy, as they have not received adequate pedagogical training for this group. That is because up to now, it was not required. These things happen when a need arises or there is some change in Educational policy and different countries adapt different ways to deal with that. The fact is that whoever is responsible for English needs to have both high language proficiency and a strong pedagogical background. What is of outmost importance right now is synergy. Both English language teachers and preschool educators have a special value and place and in this effort no one should be left out. We need to remember the words by the great Pestalozzi: ‘The best teachers teach children, not subjects’.

The challenge is to infuse in both sectors the culture of cooperation that unfortunately we have not cultivated enough especially in Greece. Neither the kindergarten teacher should be considered the authority or inadequate, nor should the English teacher be treated as a ‘visitor’ or a ‘parachute’ teacher.

English teachers need to be trained in the pedagogical context of preschool and the preschool educators can be trained to maximize the child's exposure to English and also inspire love for languages.  So both will acknowledge the value of each other.

If we succeed in cultivating the cooperation between the two teachers, this will be a step forward and a real innovation for our education in general. And this can eventually lead to ‘multi-powered’ educators, which should be one of the project’s key aims.

This project, like many others, requires careful planning, monitoring and evaluation of the pilot phase so as to be successful. These stages need to be supervised by a Scientific Committee of academics who have expertise in this field, researchers with a clear focus on preschool education and, of course, Coordinators of Education.

It goes without saying that training both EFL teachers and preschool teachers is paramount. There is a plan for the introductory phase of training to start in September before schools open. This, of course, will be just one of the many phases of training. The introduction of English in preschool contexts should be done effortlessly and playfully through mascots, cartoons, routines etc. and through integration with different themes so that it becomes a natural way of exposing children to the language and not an ‘imposed’ one. Flexibility is key, yet basic principles and criteria in developing activities will need to be shared among EFL teachers and preschool teachers. An important parameter will also be the reporting of all benefits for the children as well as all stakeholders’ perceptions on this issue. We need to inspire and unite all of them with the same vision.

I do believe this project is a step forward and a brave effort that can be successful under certain and pre-specified conditions. As with other European countries, investment in pre- and in-service teacher education is essential if we strive for a sustainable implementation of the project. This is not a time for polarization, it is a time for real, constructive and admirable cooperation.