English Language Games for the Classroom 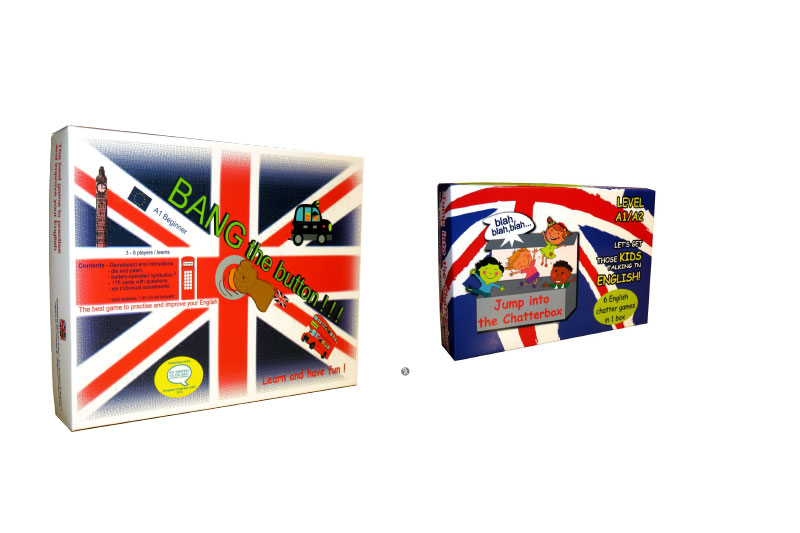 Jet Hiensch, Dutch teacher of English as a foreign language, living in Portugal, develops English language games for in the classroom. All her games are focused on the oral skills. Her slogan is: Let’s get those kids talking in English and... that’s what they do.

Website: www.englishlanguagegames.net - Email: This email address is being protected from spambots. You need JavaScript enabled to view it.

It is not easy to train the oral skills, especially speaking, in the classroom although most teachers will agree that it is so important and motivating to create opportunities where children can put into practice what they have learned, communicating in English, and have fun.

Some reasons why it is so hard to practise the speaking of our pupils are:

Having pupils talk in pairs is uncontrollable (while you listen to one pair, what do the others do?)

Interviews are often unnatural and don’t make much sense (e.g. ask your best friend about his hobbies?)

Although there are lots of games and ideas on the Internet, lots of times the level is not very clear and you need a lot of printing before

There are hardly any ready-for-use games, focused on the oral skills that you can take from the shelf, put on the table, gather your pupils around the table and let them play and SPEAK ENGLISH.

English Language Games in the Classroom

About 4 years ago, after a long teaching career of almost 30 years, Jet Hiensch decided to reduce the time that she spent on teaching in order to find more time for developing the English language games that teachers are always looking for. She still teaches part time: her classes are her laboratory where she gets inspired with new ideas and where she gets the chance to try out new ideas for games to get those kids talking in English.

The First Game: Bang the Button!!!

The first game «Bang the Button!!!» is a board game that was nominated and awarded as soon as it came out by the European Language Label 2014 in the Netherlands.

That sounds like a paradox, doesn´t it? A board game that is considered to be innovating??? In our childhood the whole family used to gather around the table to play a board game!

Well, the jury of the European Language Label 2014 awarded «Bang the Button!!!» as being an innovating, creative and internationally-orientated project.

The game «Bang the Button!!!» is absolutely unique because it involves all the skills and acquired knowledge that learners at a certain level (according to the CEFR) are supposed to master and consequently the game includes:

The character of the game, the fact that the game has a clearly defined level and the magic light button game guarantee constant interaction and participation of all players with a healthy dose of competion.

It is played by 3-6 players and consists of a gameboard, a dice, a pawn, a battery-operated lightbutton, 175 cards with questions and answers, 6 individual scoreboards with 6 markers each and clear instructions.

There are five levels of this board game available (Starters Zero for the very beginners, Starters 1 (pre A1 – CEFR), A1, A2 and B1) and the games are played in hundreds of schools in the Netherlands, Belgium, France, Portugal, Greece, Poland and Germany.

The game can be used as a complement to any method (digital or more traditional) that is used in the classroom and is a must for those who share the idea that the practice of speaking and listening is essential in English class.

How «Bang the Button!!!» is played

The question cards and the light button are placed on the indicated spots on the board and the pawn is placed on «Start». Every player gets his own scoreboard with markers. The players take turns in rolling the dice and read out a question of the category where the pawn lands.

The first player who hits the button, after a question card has been read out loud, may answer the question.

The player with the card checks the answer (written at the bottom of the card).  If the answer is correct, the player may put one marker on his scoreboard.

The first player that completes his scoreboard is the winner.

Jump into the Chatterbox

Here we have 6 “chatter games” in one box. Jump into the Chatterbox is available in two editions: Starters and A1/A2. Again, these games are focused on speaking and understanding spoken English.

The aim of all games is to learn and especially practise some basics of the English language in a playful and efficient way and,why not? … having fun!

In the boxes are clear instructions with some extra ideas. Actually the games can be played in endless ways.

The game «Don’t Get Tense» aims to practice the verb tenses, both making them (e.g. the Present Simple with –s for 3rd person singular) and using them correctly.

The game practices various tenses in three steps, increasing in difficulty. The degree of difficulty depends on which side of the gameboard is used and the extra AFFIRMATIVE, NEGATIVE, INTERROGATIVE cards that can be added to the game.

Who said that grammar was boring or difficult? No more need to get tense because of the verb tenses!

How can you purchase the games?

Andrew Betsis ELT is the exclusive distributor for our games in Greece & Cyprus.