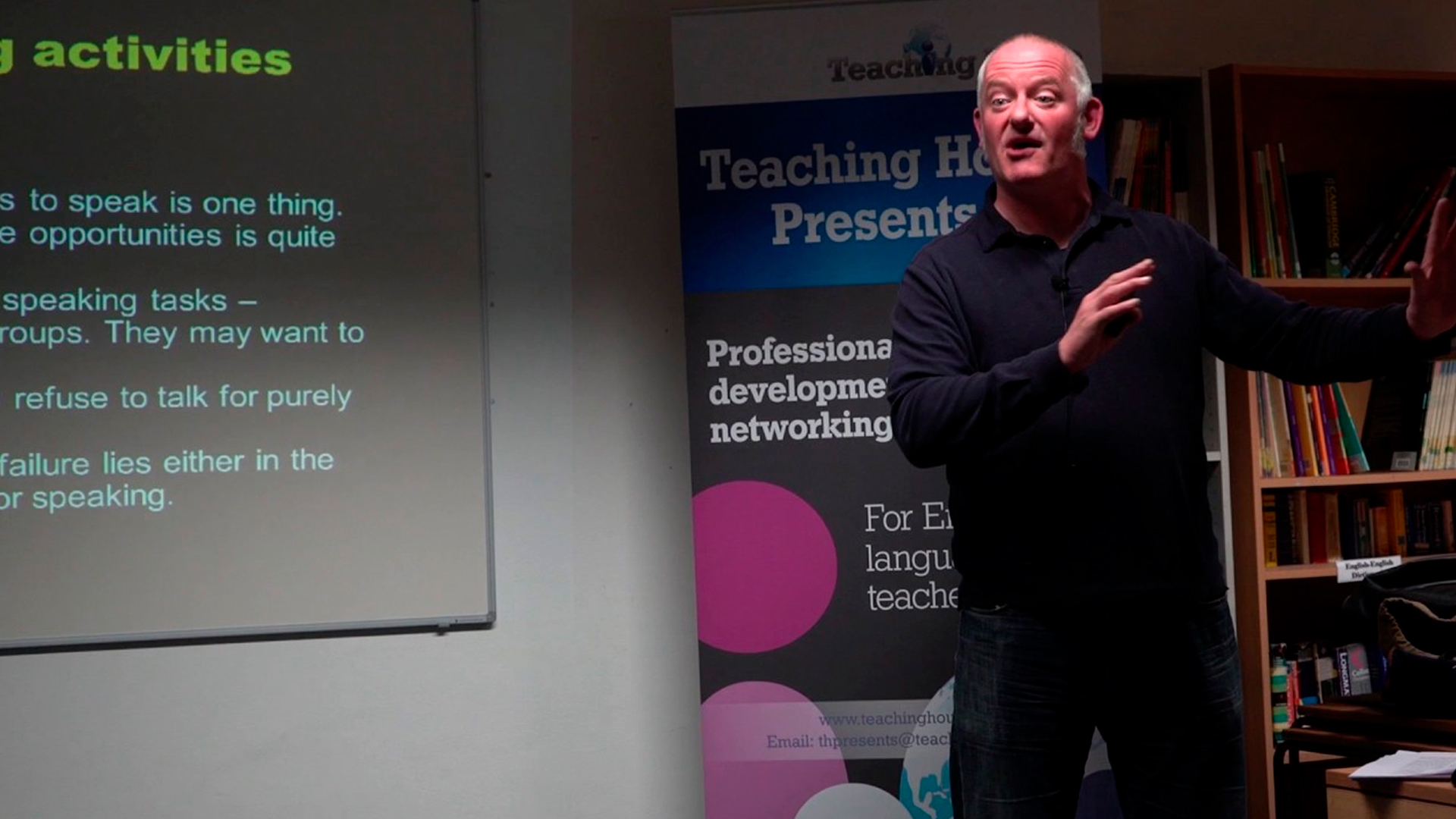 Hugh Dellar is a teacher, teacher trainer and coursebook writer based in north London and, along with Andrew Walkley, the co-founder of the online language school and teacher development centre  www.lexicallab.com. He’s co-written the five-level INNOVATIONS series and six-level OUTCOMES series for National Gegraphic and two levels of the Roadmap series for Pearson. He’s also co-authored the TEACHING LEXICALLY and GRAMMAR NONSENSE - AND WHAT TO DO ABOUT IT methodology books.

Text by Anastasia Spyropoulou - This email address is being protected from spambots. You need JavaScript enabled to view it.

I think it’s very hard to make generalisations about things like this as the focus will be different for different teachers in different places and in different contexts. I think the sad fact of the matter is that in many places, the main focus is still very much on structural grammar – often with little thought for how the language is generally used – and that’s obviously something that’s long bothered me.

As for what the focus SHOULD be on, I’m not sure I accept the stark dichotomy implicit in the way you’ve framed the question. I think that we do obviously want out students to be able to use language to communicate with others around the globe, but if they’re going to be able to do that well, then there does also need to be a strong focus in the classroom on language, memorisation, learning things by heart, and so on. The two things aren’t mutually exclusive, and if anything, the fact that learners are ever more likely to use English as a medium of international communication means that they’ll need more – not less – language to do so . . . and the language doesn’t learn itself. Students still need to do the hard yards and we need to be there to help them do them. In terms of cultural content, I don’t have a problem including different kinds of cultural stuff in classrooms, but I think we also need to recognise that many students have their own cultural worlds that they live and communicate in. I mean, to give just one example, a good Slovenian friend of mine communicates in English via gaming, via online thrash metal communities and in ELT groups – and that’s just the stuff I know about. My point here, really, is that we can’t begin to know or teach towards all of the huge range of different cultural worlds that learners exist in, but what we can do is teach language that will be used in many.

Again, my answer would be a sort of ‘It depends’ here. I mean, the idea that another language on its own will get them a better job often isn’t true. The world of work also requires a lot of other kinds of know-how and a lot of soft skills too. I think it’s more honest to say that getting a good job involves knowing a lot about your chosen field, having good soft skills, having grit and determination, and that being able to function in a foreign language – and English is just one option here, obviously – can be an added feather in your cap that may well give you a competitive edge in some occasions. I’d also add that the job markets are changing fast, and clearly not always for the better, and that to protect yourself, and your colleagues, you’re in a much safer place if you join a union. The collective is always stronger than the individual.

I think that if we ONLY focus on fun in its simplistic, base forms, we’re not doing anyone any favours. I think fun and enjoyment should come from the human interaction of the classroom, from the stories and jokes and banter and bonds that emerge through language as the class goes on, and that an over-reliance on games or gamified learning both infantilises people and actually reduces the likelihood of the deeper, richer kind of enjoyment emerging. I also think we just need to accept that not everything will be fun all the time and that sometimes things are just work . . . but the end result of that work CAN be fun and that sometimes doing the hard yards takes you to another place where you’re more able to be yourself, express yourself, and entertain yourself and others.

Absolutely yes. There are no short cuts and no magic bullets. I know from my own (often bitter!) that reaching – and then maintaining – even a modicum of fluency in any given language is very much a matter of regular, repeated contact and exposure and revision and development and use and struggle! I almost feel that really to get anywhere in a language, you do need to be doing something – even something small like going back over notes or revising on Quizlet or whatever – for at least fifteen minutes a day . . . day in, day out.

It certainly should be, yeah, and I’m sure many of us have seen adverts that make claims like ‘Speak English like a native in just three weeks’ which really should be either taken down or just prosecuted for lying to people. With the spread of social media, and the explosion of clever marketing, we’re going to see more and more of this, and as professionals in the field, we have to keep on calling it out for the nonsense it is . . . and hoping we prevent a few people from wasting their hard-earned cash on this stuff.

I haven’t done the research on this, or even read all the research on this, and I suspect 10,000 hours was just a tidy number that sounds great in talks and that’s come into wider use because Malcolm Gladwell popularised it. Clearly, different people progress at different speeds, and some reach certain milestones quicker than others. I think that what is incontrovertible is that no-one ever got really good at anything overnight, and that developing a deep knowledge of a subject or a skill to any deep level takes a lot of time and effort.

They should, just as we should all care about the working conditions, the pay, the contracts, etc. of all those we interact with and buy services or products from. In the end, though, students shouldn’t be dumped on or used as emotional punchbags for us to take out our frustrations on.

Ultimately, it’s our employers who bear responsibility for our wellbeing, pay and conditions at work, and angers and frustrations should be directed upwards – ideally collectively, and through an organised union. In my experience, if teachers end up going on strike and communicating the reasons for the strike action clearly and calmly, the vast majority of students are sympathetic and can also often see signals from further down the road of the struggles their own working lives may come to include.

I’m tempted to just say ‘a language is’ here and move on, but obviously the question is broader and more subtle than that. I think actually there are many different ways of demonstrating learning and it all depends on what you want to demonstrate to whom and when. I mean, in class, knowing a word that the teacher has gapped in some boardwork is a clear demonstration of learning having occurred, as is using some new items in a homework, or getting 70% on a revision test. Teachers also see more subtle signs of learning all the time as we notice students start to use in their output things that we know we’ve taught them. To me as a teacher, these kinds of ways of making learning visible are the most important and in my classes, I try to build in many different ways of encourage students to perform memory, if you like, so that the small steps they’re making are clear to both them and me. After that, things like certificates, portfolios, etc. can all be useful to show external observers like parents, bosses, potential employers, universities and the like that a certain level of competence has been reached . . . and, of course, they also provide proof of progress to the learners themselves. In the end, though, you can brandish whatever piece of paper you want, but what really impresses upon people the fact that you’ve attained a certain level is seeing and hearing you use what you’ve learned on the way there.

If anyone is still asking which certificate is easier to pass, I think we can safely agree they have no real right to be considered an ‘educational leader’! As language teachers, of course we need to be asking what out students can already do, and we need to be framing that in terms of communicative competences rather than ticking off lists of grammar structures or lexical sets they can regurgitate. However, we also need to be asking questions like ‘what kinds of conversations might they best need to focus on next?’, ‘if they’re going to have those conversations better, what language might best help them do this well?’, ‘what can we as teachers/course designers do to ensure that they get repeated encounters with the language and that revision and recycling are built into our courses?’ and so on.