Paul Dirac was born in 1902, in Bristol. He is considered as one of the most important physicists of the 20th century. He was the father of antimatter created by the annihilation of positrons which he described in the so-called “most beautiful equation in the world of physics” (see the title of this article). He was the Lucasian Professor of Mathematics at the University of Cambridge (1932 to 1969), like Isaac Newton and Stephen Hawking, and in 1933 he was awarded the Nobel Prize in Physics for his contribution to the reconciliation of general relativity with quantum mechanics. A genius, with a brilliant career.

Paul Dirac’s secret was that he belonged to the 20% of the world population, equally distributed between women and men, of the HSPs or Highly Sensitive People. It was indeed obvious that Paul Dirac was different. If you look at this photograph carefully you would recognize the only student who did not care to pose or even face up to the camera lens busied with his reading: 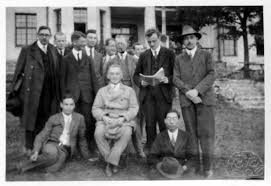 When at university, his colleagues had invented a measurement unit from his name the “dirac” equals one word per hour. He was a shy, modest and reserved scientist, devoted to his science. He was struggling with daily routines and commitments and he was eccentric towards his relationships with other people. He was lucky, though, to meet and marry Margit Wigner who met him in Princeton, in 1934. As she revealed she met this “lonely-looking man at the next table”. He was lucky to meet her because Margit took charge of everything else allowing him to focus on his science. Those were indeed his most prolific years as in the period between 1939 to1946 he published 11 papers.

Paul Dirac is just the case study of what we may call Highly Sensitive People syndrome. Some of you may think that we are talking about introverts here. This is not the case. Or you may characterize them as over-emotional or even eccentric. Far from these. HSP is an innate (genetic) personality trait which can be called “sensory processing sensitivity”. It is quite recent research and Dr. Elaine Aron, American clinical psychologist (www.hsperson.com) was the pioneer in this research. Her findings were reported in her book “The Highly Sensitive Person” (1996) and more systematic research has been conducted since then from universities and labs all over the world contributing to further updates of the initial study.

Dr. Aron uses the acronym DOES to summarize the main features of HSPs. “D” stands for depth processing, in other words, a preference to process information more thoroughly (the right brain dominance). This may lead to physical and emotional exhaustion. Most HSPs tend to overthink other people’s reactions, attitudes or views.

Then, “O” stands for overstimulation. This is manifested when HSPs are overwhelmed by the world around them. Even the subtler noise, smell or sound may distract them. They live with all their senses on high alert.

“E” stands for empathy and this feature is perhaps graphically understood by a Hebrew saying: “When one cries, the other tastes salt”. They have a very active inner world where all sorts of emotions are magnified, they experience them in superlative: sadness is a deep sorrow and joy is pure ecstasy. This makes them sensitive to criticism and they can empathize without any limits. In this sense, HSPs are on the other extreme of the empathy spectrum which is alexithymia (Alexithymia is a subclinical phenomenon involving a lack of emotional awareness or, more specifically, difficulty in identifying and describing feelings and in distinguishing feelings from the bodily sensations of emotional arousal (Nemiah et al., 1976).

Finally, “S” stands for awareness of subtleties. Highly sensitive people are able to recognize and interpret other people’s feelings and inner self, they are able to distinguish between irony and sarcasm even when they are very young. They do not perceive reality in a bulk, general way but, in contrast, they analyse every single pixel, any single word or any hint.

These five features are easily discernible and they can give you a clear indication that you have to do with an HSP. Although they are empirically driven, there are also personality inventories you can use to reach a more informed conclusion. Dr. Pluess et al. in his article:  Environmental Sensitivity in Children: Development of the Highly Sensitive Child Scale and Identification of Sensitivity Groups (2017) available here, provides and extensive study on the notion of Highly Sensitive Child and what this means and how they can be spotted. There is a 12-item personality trait questionnaire especially adapted for children that can give you a clearer picture of your students’ personality.

Being “sensitive” has been stereotypically associated with mental and physical weakness. Now, there is evidence that there are people whose sensitivity comes from their genotype which offers a specific profile or phenotype. Research provides evidence of what it means for a child or an adult to be an HSP. Most importantly, sensitivity is not a characteristic only for the HSPs; it is shared by all people, however, HSPs carry it as a personality trait. As a society, we have come to think of sensitivity as a flow that tempers with our ability to become ever more optimized, detached and robotic. It is time for parents and teachers to look deeper into our children or students personality.