Myths & Truths about B2 level in EFL

In 1939, Cambridge University introduced the “Lower Certificate in English”. This certificate has become the inspiration for what is known as B2 level in language learning (CEFR, 2001), reflecting the language skills an independent user in any foreign language is supposed to possess. 82 years after its introduction from Cambridge University, and 20 years after its description as the main language learning descriptor from the Council of Europe, it is time for us to investigate the impact of B2 level in EFL.

The most interesting way to do this investigation is to try to dispel popular myths that B2 level is teemed with.

Myth 1: Language command in B2 is difficult to be reached in any foreign language.

Truth: B2 level is the prerequisite for any language learner to climb up to the proficient user. 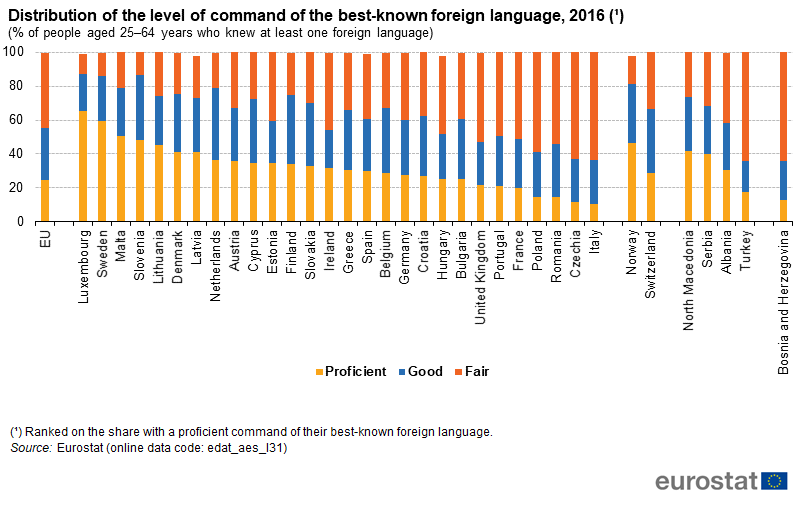 The table clearly indicates that all over Europe, the vast majority of people speak foreign languages and do so basically in B2 level (Good command) with few exceptions, of course. B2 level seems to be the threshold of using a foreign language and although English may be one of these languages, this table places emphasis on the importance of B2 level. In other words, B2 is well-established as the main level of language learning.

Unfortunately, this truth does not refer to the English language only. To have such information we would need an English Proficiency Index. Well, we have one!

It is an index by Education First (https://www.ef.co.uk/). Education First (EF) is an organization which offers courses and cultural programmes, among other things, that target those who wish to learn a foreign language, most notably, English. It was founded by Bertil Hult back in the 60’s. EF published its first index in 2011 after developing a fully adaptive Standardized English Test, available free of charge to anyone anywhere in the world who wishes to test his or her proficiency in English. The data are collected and analysed and then the index is compiled. There are in fact two separate indices. One refers to adults (https://www.ef.com/assetscdn/WIBIwq6RdJvcD9bc8RMd/legacy/__/~/media/centralefcom/epi/downloads/full-reports/v10/ef-epi-2020-english.pdf)  and one to students (https://www.ef.com/assetscdn/WIBIwq6RdJvcD9bc8RMd/legacy/__/~/media/centralefcom/epi/downloads/epi-s/2019/ef-epi-s-2019-english.pdf).

Both documents, available free from their website, provide a wealth of information and statistics on the use of English all over the world. The most interesting is that it also provides an index with the countries with the highest scores listing them according to the test takers scores and proficiency. The bands of this index are as follows:

According to the scores then, Very High Proficiency is considered performance from 600-800, High and Moderate Proficiency from 400-599, Low Proficiency from 400-499, and Very Low Proficiency from 200-399. Greece, then, is in 21st place with an average of 578, whereas the top three countries are: Netherlands (652), Denmark (632), and, Finland (631). The whole list is available in the downloadable document. Let us use this index then to continue with B2 level myths and truths.

Myth 2: Greeks have a mania with exams and certificates, especially the high-stake ones.

Truth: All over the world learners’ goal is to perfect their language skills. 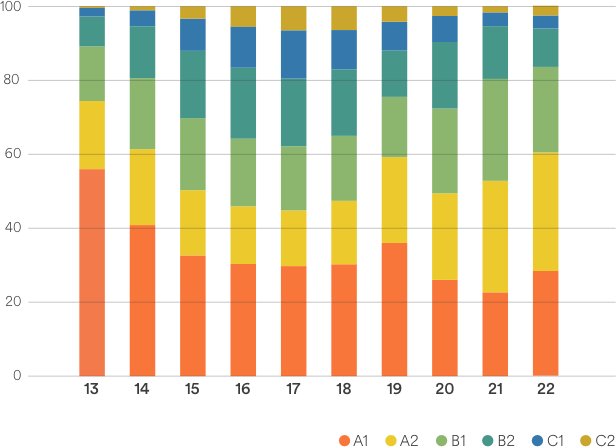 The table proves that students all over the world from young age try to gain vital language qualifications to prepare themselves for the competitive job market. Especially nowadays with the emphasis on the gig economy, there are more reasons young people to try harder to equip themselves with higher rank certificates in English.

There are also two extra reasons why they are very determined to succeed.

The first has got to do with another popular myth.

Myth 3: B2 level in English is just the basic qualification. 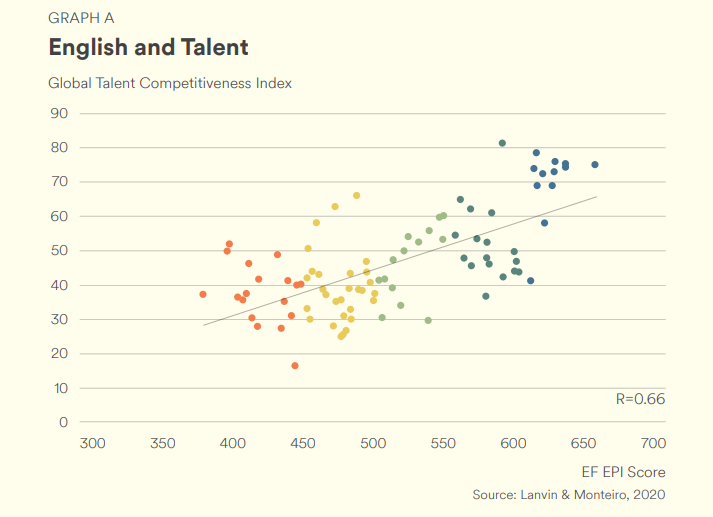 Definitely, the higher your English certificate the more the chances to combine it with other higher order personality traits but it is clear that B2 level provides the threshold for such an advancement. Moreover:

Myth 4: B2 is not enough for a competitive job market

Truth: B2 level is a powerful qualification for the job market and makes the holders more ambitious for the next level. 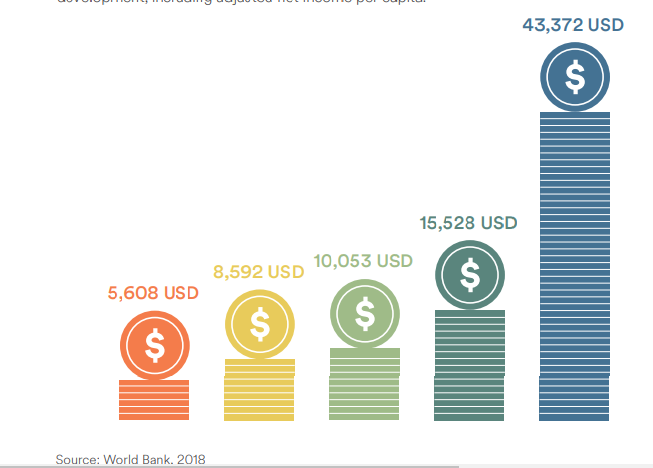 Comparing the salary ranges, B2 holders enjoy an average one (15,528$), whereas C1 and C2 ones are the well-paid (43,372$). The main advantage of B2 holders is the prospect of making the next step, improving their income considerably.

Additionally, there is a strong correlation between the quality of the studies and the time that should be invested.

Myth 5: B2 level can be acquired in a relatively short time or you can take a shortcut

Truth: Acquisition is different from certification; B2 needs over 1,000 hours of studying

Education First estimates that an adult needs 1,200 hours of instruction and practice to acquire B2 level in English. According to Cambridge Assessment English any level needs about 200 hours of formal instruction. 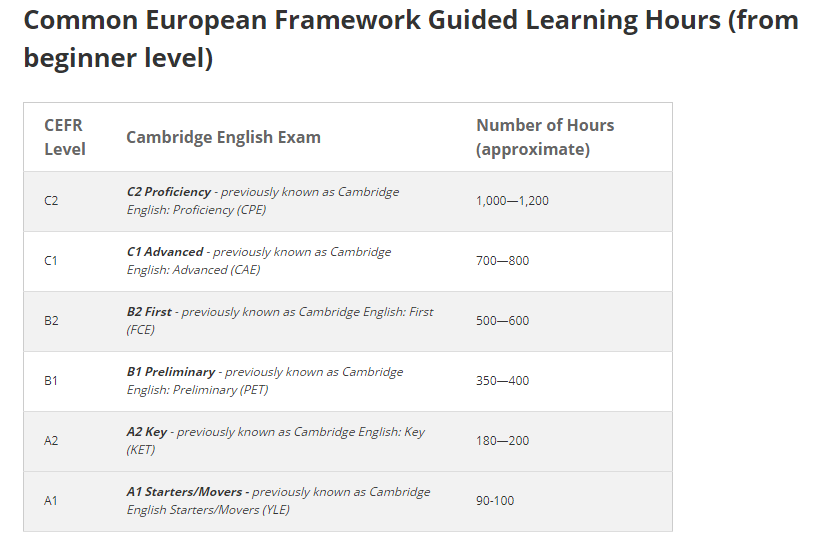 Note that this table refers to the “guided learning hours”, in other words the “in-classroom” instruction. In average, learners need one hour of practice for two hours in classroom which practically raises the amount of time to 900 hours. If you imagine courses of 150 hours per academic year (20 hours per month for about 8 months) then you need about 6 years of language instruction to reach B2 level.

Limitations of the English Proficiency Index

Education First admits there is sampling bias in the way data are collected. The Standardized English Test (SET) is attempted by people interested in studying English or confirming their proficiency in English and this population is unstable and not controlled. Apart from this, another bias is the content one. The SET tests the receptive skills of reading and listening and not the productive ones: writing and speaking. As a result, the scores reflect part of the users’ language competence. However, EF claims that its test correlates with TOEFL and IELTS reading and listening papers and this gives it some sort of reliability.

The impact of B2 level in EFL

It is obvious that B2 level has played an important role in the development of English language learning, on language courses, their syllabi and certification. It correlates with several personality characteristics and is associated with the socio-economic status of its holders. Above all, it is the threshold that allows English language users to self-motivate and regulate themselves for the completion of their language learning career.