Who Works The Most Hours Every Year?

Across the globe, people are firmly back in the working groove after all the fun, relaxation and overindulgence of the holiday season. This year, some workers are going to have a far longer shift than others. According to the OECD, Mexicans work the most hours out of any country with 2,246 on average. That's 467 more than an average American worker and for less than a fifth of the pay.

In recent years, the South Korean government has attempted to reduce the long working hours in the country but its workers are still averaging 2,113 hours annually. Greek workers were sometimes labeled as over-paid, lazy and eager to retire early after the financial crisis struck but those accusations were certainly unfounded. People in Greece work the most hours of any European country with 2,042 every year on average.

Congratulations to German colleagues who work fewer hours and earn most. Great efficiency! 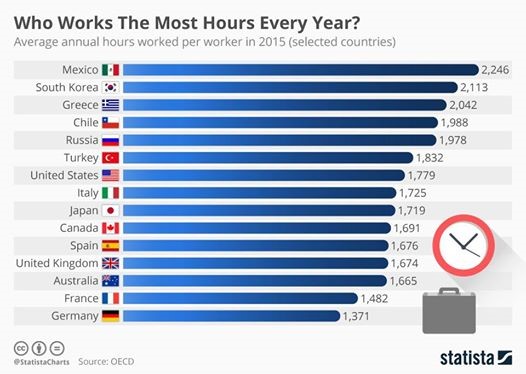